The basement lounge you wish you had. All the same great food and drinks as upstairs, plus additional guest beers and a variety of special events.

Only Available in the Jimmy LaPanza Lounge, view full On Tap list.

Puttin' On The Ritz 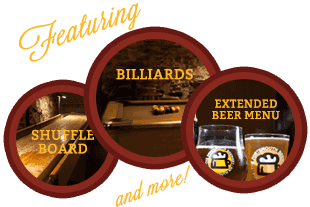 Grab a friend. Grab a Couch.
Grab a beer. Grab an App.
Just Make sure you grab something!

Need to Book a Large Group? IT WAS 1978 IN NEW YORK CITY. They’d turned Roseland into a rollerskating rink. The Copa was a joke, a parody of its former self. You could still see the Ramones play at CBGB, and the disco scene at Studio 54 and Xenon reigned supreme, though the hippest were already migrating to the Mudd Club, Irving Plaza and other downtown dives. I was in college and got a job as the weekend doorman at a great little hotel in Murray Hill in midtown, which housed a place called the Jimmy LaPanza Room. I’d hail a few cabs and carry some bags, but mostly I was there to take care of Jimmy’s guests. I parked their cars, enormous Caddies all, and quickly learned how to jam a Fleetwood into a VW-sized space, and how to tie up a block’s worth of parking with a dozen cars. And I got tipped five bucks apiece. Pretty good money in those days!

Even then, Jimmy’s was a throwback to another era. Mobsters from the Fulton Fish Market and grandees from the Garment District came there to drink champagne and dine on Chicken Kiev. The piano player was married to the coat check gal, and both had worked for Jimmy for over thirty years. So had Mario, his maître d’, and Rocco, his chef. Most of Jimmy’s customers had been coming there for thirty years, too. And Jimmy, a diminutive figure in an impeccable tux with an FDR cigarette holder in his hand, greeted them all by name. He was the reason they kept coming back, not the Chicken Kiev.

The Jimmy LaPanza Room is long gone; Jimmy retired to Miami where he played a mean game of bocci. The Tuscany was bought up by a big hotel chain, then closed down because it was too small, then reopened because it was small, and I’ve moved on to other things. I learned a lot while I worked for Jimmy, like the secret of the perfect martini, how to tell ribald jokes in the most elegant company, and how to wear a porkpie hat just so.

To tell the truth, the Jimmy LaPanza Lounge, located in the basement of the Portsmouth Brewery, looks nothing like the original Jimmy LaPanza Room in New York. But then again, nothing ever could: that time is long gone.

For many years, Jimmy himself would drop in unexpectedly, driving up from Florida in a newly acquired convertible, sometimes to show off his latest girlfriend, sometimes just to bust my chops, and sometimes to make sure that the place that carried his name was worthy of it. Jimmy is gone now, but we hope we’ve captured a bit of his spirit. Stop in and see for yourself.