Hey all,
I wanted to let you know how the Home Brew taste out went.  The beer judging took two rounds to select a winner.  The professional pallets that were used for this were Dave Yarrington and JT Thompson from Smuttynose as well as Matt Gallagher, Tyler Sildve and myself from Portsmouth Brewery.  The beers were separated into one of five categories; Light/Easy Drinking style, Hefe/Wheat beer, Belgian style beer, Dark beer and Pale Ale/IPA.  We went though all the beers in each category in that order so not to blow our palates. After we made it through all 49 beers (one guy e-mailed me saying that his batch got infected so he didn’t submit it) we had 15 beers that made it to the second round.
The official break down was of how many beers made it to the second round was…
4 from the Light category,
3 from the Wheat style,
1 from the Belgian,
3 from the Dark and
4 from the IPA/Pale ale.
So after all that we went though our notes and had to re-taste a few of them to make sure our notes were correct.  After all of us talked we came to the unanimous decision that the winner was……
Kate Rodgers who brewed a 5.8% Chocolate Cherrywood Smoked Porter 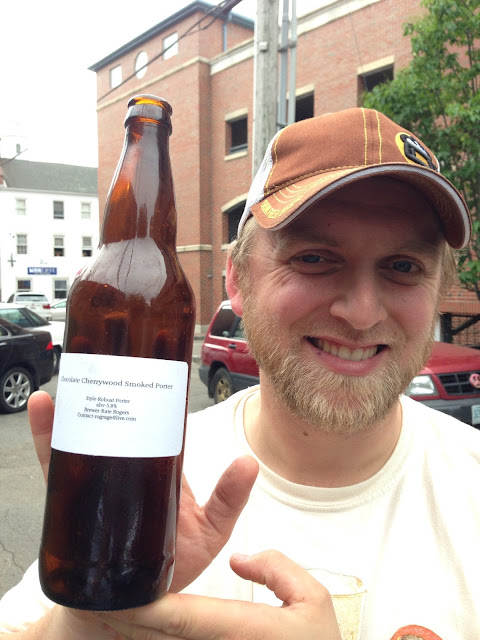 Thanks to everyone who submitting beers it was a fun trying all the beers.  Keep a look out for Kate’s Chocolate Cherrywood Smoked Porter to hit the taps in the next couple of months!
Cheers,
Tyler